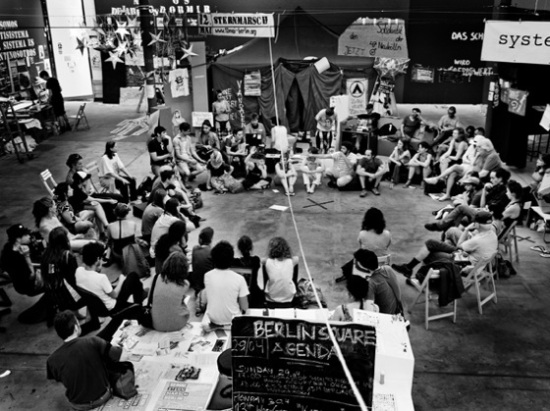 OWS at the Berlin Biennial, 2012. Photo by Marcin Kalinski.

Much reviled, widely derided, the 7th Berlin Biennale (BB7) achieved its aims regardless. The biennale curator, Polish artist Artur Žmijewski, proposed art as a problem and activism as the solution and in the process created the circumstances for reconsideration of both. In keeping with his tendency to be a provocateur and bully, Žmijewski (creator of, among other works, the highly discomfiting video 80064 (2004) in which he persuades a Holocaust survivor to have his faded Auschwitz tattoo redone) poses this question with a brutal hauteur. He titled his curatorial essay “7th Berlin Biennale for Contemporary Politics” and made a show at the BB7 press conference of declaring his antipathy to art.

Banishing much of what contemporary art audiences expect to see at an event like this, Žmijewski and his co-curators replaced it with works, often by nonartists, that were unambiguously political in intent. At the Kunst-Werke (KW), the event’s primary venue, the walls were hung with banners and painted with the murals and stencils of street art made by various artists and activist groups. On the level of sheer visuality, the exhibition suffered from too narrowly defining what political art looks like. In this sense, the BB7 was guilty of the oft-repeated critique that overtly political art risks addressing merely the known enemy. Along with street art, the KW presented a number of works that shared in common a taste for devising small problems—little moral dilemmas—for the visitor. In an installation by Jonas Staal related to his New World Summit, an “alternative parliament” event organized during the Biennial, a passageway was hung with the flags of the various participating insurgent groups, positioned low to the ground and close together, creating a kind of gauntlet to be run to get to the other side.  Teresa Margolles’ stack of giveaway posters featured gory images of one year of drug war murders in Juárez as they had appeared on the front page of one of the city’s tabloids. Also free to take home were Łukasz Surowiec’s replanted seedlings that had originally taken root in the ground around the Auschwitz-Birkenau concentration camp. Of most consequence perhaps, Khaled Jarrar invited the biennale audience to stamp their passports with the seal of the nonexistent State of Palestine. Take up this offer and you would have joined an international community in solidarity with the Palestinian people, a gesture that under certain circumstances—attempting to enter Israel, for instance—could mean the loss of rights you otherwise take for granted. At center stage within this mise-en-scene of political theater, on the main floor of the KW were representatives of the Occupy movement itself. Imported from New York, members of Occupy Wall Street, along with Spain’s M15 and Russia’s Pussy Riot, among others, had set up camp for the duration of the exhibition. The consensus in Berlin seemed to be that moving indoors somehow neutralized the movement; more than one person told me the BB7 was “occupying” the Occupiers (clever!). Who made this rule, so widely agreed upon, that activists have to be cold and wet as opposed to warm and dry to be effective?

Activists at the venue, who were busy painting signs for an action they would undertake later that day in support of the Deutsche Guggenheim’s nonunionized workers,  reported being happy to have a base in Berlin from which to expand their operations. “You never know where it’s going to blow up,” one of them told me. Where it will not blow up—and we can be certain of this—is inside the walls of an art institution conducting business as usual. This is of course Žmijewski’s point. The tactics of the Occupy activists and their cohort might be a little crude, their handmade signs a little embarrassing, but at least the time frame they are working in is “now.” The alternative is the deferred time frame of the avant-garde that tends to structure art world thinking about political ideas. As Žmijewski notes, the “label of ‘bad art’ is frequently deployed, as if by targeting the form, one needs not be concerned about the message.”  Whether he believes as he claims that the biennale takes part in “transformative social processes,” Žmijewski performs the service of helping us subject to scrutiny claims to political efficacy made on both sides of the argument. When confronted with the vernacular style of political protest arrayed throughout the KW, all I could think of was how feeble the tools are that we have at hand to combat the power of the financial elite, precipitators of financial crises for which they, to a person, remain not held accountable. Žmijewski’s exhibition provokes profound questions about how we experience history—by definition it is understood in retrospect, even when vast sectors of the population suffer from its machinations. It is for this reason that I felt genuinely moved by the 7th Berlin Biennale and the generosity it displayed toward political activism, which will carry on regardless, whether or not the art world continues to give it attention.

This text was originally published in Art Papers