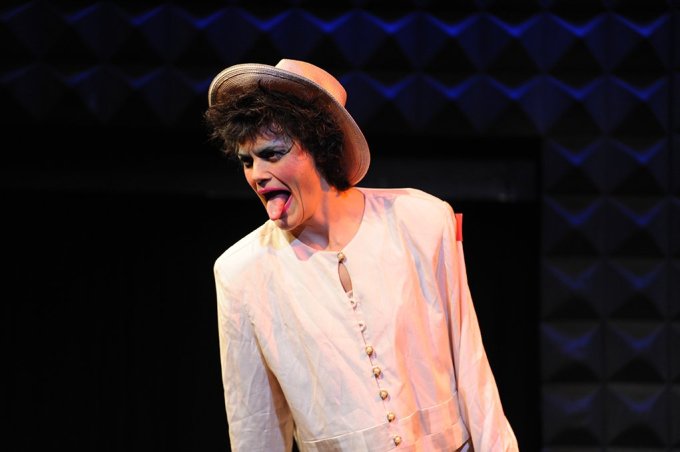 Los Angeles-based Jibz Cameron on straddling the worlds of art and comedy, parodying The Handmaid’s Tale and making TV moves with Jack Black

2017 is bananas. Nazis are back – and they are not afraid to cry on the internet. It’s a white supremacist man-baby thing, one given free reign by that Whiner-in-Chief currently residing in the Oval Office. If that’s real life, how is art supposed to compete?

Los Angeles-based Jibz Cameron, who performs under the name Dynasty Handbag, is one answer.

The queer performance artist and comedian’s videos and theatrical shows skirt the edges of what’s acceptable to the mainstream. Take her D-Bag’s Quick And Easy Makeup Tutorial For Life Under Fascism (2017), for instance. Smearing her eyes in a black “accent” she calls “doom, capitalism and white supremacy” she crosses the line from humour to discomfort. It’s a literal black eye that reflects our troubled times back to us.

Always with her work, each manic moment is redeemed by humour. In Vague (2016), the artist vamps’ guttural noises to strains of the Madonna hit with the similar name. As with her video that parodies Beyoncé’s vanity doc Life Is But A Dream (both 2013), Cameron offers welcome relief from the dominant culture’s dictates of perfection. Called by one smart critic “a send-up of the current social id,” Cameron’s act has attracted the attention of comedy heavyweights like Jack Black and Community creator Dan Harmon.

Though she is often referenced in the same breath as profane talents like John Waters or Amy Sedaris, she also recalls Karen Finley, the performance artist whose work sits at an intersection between art and theatre. Its not a perfect analogy. Cameron is madcap while Finley is more about unadulterated catharsis. Yet there is something to the comparison. Both show us how fraught political moments give us the artists we need.

NOW caught up with Cameron ahead of the Toronto debut of her latest show I, An Moron.

Your work straddles the worlds of performance art and comedy. Would you say you feel more at home in one than the other?

I don’t feel at home anywhere, really. It depends. Neither the typical straightforward comedy world nor the typical straightforward art world feel like a cozy blanket to me. But there are facets within those worlds where I think people are open and they kind of get that the two things are not mutually exclusive, and there is room for going in and out of those two contexts. Ultimately, they are just frameworks.

I guess one art world precedent is the performance artist, Karen Finley.

There are lots of artists I identify with. A precedent for me would be Andy Kaufman. I am also really influenced by the early 80s female comedians, like Gilda Radner and Lily Tomlin. All that wacky stand-up. But it is just kind of more blended together in my presentation rather than sectioned off into specific characters.

Ah, your work is not skit-based?

But it can be. I don’t think that any of it is really limiting. What I’m doing actively is not trying to think about those things, and just do whatever I want. I just shot this thing the other day, a spoof of The Handmaid’s Tale – The Handbag’s Tale – and because I have this persona in place already. I have something to work off of, but its not like high art. Its like, really, really, lowbrow. Real low. [laughter]

I will. I think she’ll love it. I actually really did love that book, and I like the show, too. It was really campy. But it often surprises me that people are thinking about, wondering, you know: what are you doing?

That’s what’s good about your work. That you are able to provoke the question: what is this? Its very refreshing. There’s an obvious way in which Trump is the context within which everything is happening right now. And you refer to that in your Makeup Tutorial For Life Under Fascism, but I also thought there is this other context. I just found out about “virtue signalling” do you know about that?

No, what is that?

It’s about political correctness. Like, everybody’s fiddling about correctness, and Rome is burning.

Oh right. Philosophy is for those with full bellies?

Yes, exactly. I feel your work responds to that as well, because its so the opposite of correct behaviour.

My work’s the opposite of correct behaviour?

Well, if you say so. [laughter] The show I’m going to do in Toronto premiered at the Hammer Museum [in Los Angeles] in October last year. All that year I was writing it and I was really frustrated with North American white Liberals who are all talk no rock, or some rock but then the rock is like, so tied into capitalism – like, what kind of choices of gluten-free bread am I am going to buy and what company is the most moral? Choices we feel are moral and somehow making a difference, but what the fuck is actually going on? Nobody really knows. It’s hard not to be paranoid you are being led down some path that’s meant to distract you from some other terrible thing that’s happening.

Nobody knows what’s real and it is hard to grasp onto that, but I think what you’re doing is very real and its very effective for that reason. You are somehow channeling that or expressing that directly, which is a bit in short supply at the moment.

Well, thank you. I feel like I can express questions and outrage and naïveté. I know that I am naive. I just have feelings and I know where else to put them.

What’s next for you – and Dynasty Handbag?

Well, I’m trying to sell a television show right now with my writing partner Amanda Verwey. I’m having lots of meetings with enthusiastic, heterosexual, white gentlemen who nod and laugh a lot about how – well, they do say they will kill you with enthusiasm here – but I do have some really cool people that I am working with. Jack Black, who is just really awesome and a sweet guy that really loves art and wants to do fun projects. And also Dan Harmon, a producer and writer who has done a bunch of interesting stuff. He is an interesting guy who is in on the joke of the whole thing. And I am doing work on a new, live performance for the spring called Titanic that will premiere in New York. And, what else am I doing? Trying to finish all of Prime Suspect once again.

Yeah, I’m going to get through it for the sixth time. Some pretty big goals I’ve set up for myself.

This text commissioned for https://nowtoronto.com/art-and-books/art/dynasty-handbag-opposite-correct-behaviour/