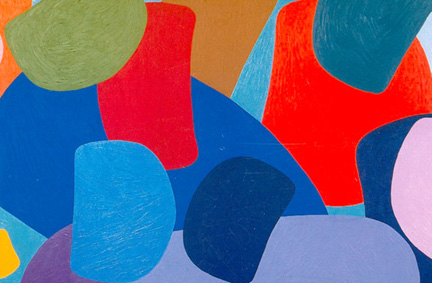 “It’s nice to make beautiful paintings, but at some point I have to record history”

Given its aversion to rankings, I will risk offending Canada’s ultra-egalitarian sensibilities by saying Lawrence Paul Yuxweluptun is Canada’s best artist. By this I mean, Yuxweluptun is the artist you would learn the most from if you were lucky enough to see his works presented in a career retrospective. Far from poking around in the increasingly dimly-lit corridors of conceptual art practice, Yuxweluptun maps out his own territory in art. Yuxweluptun’s work shows how a long term commitment to craft and the set of problems it presents to the artist will pay in the end a certain dividend of freedom. If an artist’s work is good enough to merit career examination, viewers’ get the chance to understand what it means to be an artist. A Yuxweluptun retrospective, currently only available on his website, would tell you how the best art creates its own context of authority, and that this is the way an artist speaks to his or her audience; speaks as if gifted with language, that is, regardless of the format of expression. In his work, it is clear how the words ‘authority’ and ‘authorship’ are related, and why mastery of an art form can create a position of autonomy for the one who has mastered it —and if words like ‘craft’, ‘self-expression’, and ‘mastery’ have been in recent years have become unfashionable, maybe its time to bring them back again?

When I spoke with him on the phone, Yuxweluptun seemed to have little interest in discussing his work. His focus instead was almost exclusively on the subject matter that informs his paintings: the double bind of the Pacific Northwest Coast Indian, who in Yuxweluptun’s view has been sold out by white man and Indian chief alike. From speaking with Yuxweluptun, I know it would be wrong to call him a ‘Canadian’ artist. His ancestry is a mix of Coast Salish and Okanagan First Nations. It is a heritage embodied in the iconography and political perspective made manifest in his work. Differing from most other parts of Canada, First Nation land claim negotiations in British Columbia are ongoing, to this day. For Yuxweluptun, this means the potential for betrayal of his land and people is ongoing, feelings of connection to the land carrying within them a threat of dispossession. For Yuxweluptun, then, history is not in the past, something understood in retrospect. Rather it is the developing story of his people, their present reality, something, as he says “you wake up to every day.”

That Yuxweluptun sees himself as a History painter is clear. He is a newspaper reporter and polemicist, dramatizing the issues he cares about with the suspicion that some people would prefer he didn’t do this. Few artists in any medium have more successfully vilified ‘the man’, an enemy who in Yuxweluptun’s paintings—whether he is Indian Chief, government official or corporate factotum—wears a suit and a tie. Each of these figures bears a head derived from the artistic iconography of the Pacific North West Coast as a marker of the compromise or worse betrayals he represents: the mask worn is one of perfidy. That he chooses to characterize this iconography as sinister is a measure of not necessarily of Yuxweluptun’s alienation, but of his desire portray alienation of his people. Not quite human, Yuxweluptun’s figures are recognizably a part of the landscape he depicts in his paintings. It is a fully animistic universe, with hills, trees and mountains given life through compositional use of those same iconographic forms. And if his counterparts who inhabit an everyday reality of common sense–that would be us, the audience–fail to see the world as similarly alive and animated by a cosmology of good and evil, this is a mark of our own alienation and complacency, one that will probably doom us in the end.

As a history painter working in the realm of contemporary art, Yuxweluptun keeps company with a select group of artists in Canada, none other that I can think of who make paintings. Rather, Jeff Wall and some of the other Vancouver photoconceptualists come to mind, and maybe the work of Althea Thauberger, an artist who makes video and photo-based installations with the aim of bearing witness to history. I can only speculate that the powerful presence of the natural landscape on the West Coast in Canada makes ‘History painting’ in its contemporary incarnations a concern of artists living there. By comparison, Toronto artists seem preoccupied by the contemporary formats of the still life, suggesting that while West Coast art ensues from a sense of place, Toronto’s artistic imagination is more inward looking and reduces down to the scale of the domestic.

Extending his cosmology beyond the figurative is the body of work Yuxweluptun has made around the compositional figure of the ovoid. Freeing the ovoid from the role it traditionally plays in the art of the region, most recognizably as a pictorial component of the totem pole, Yuxweluptun then lobs the form at the familiar styles of Modernist painting, causing Modernism’s eternal verities to come tumbling down. This tells us not that Modernism had a short eternity so much as it represents a territory that continues to expand. Stacked one on top of the other Yuxweluptun’s ovoids make up a totem pole of Colour Field composition. Gently upending a succession of Modernist genres, the ovoid becomes the ‘Indianized’ format of art history’s re-composition. The playfulness of Yuxweluptun’s approach does not undermine his seriousness of purpose, or the clarity of message his simple method of historical revisionism imparts. Few artists I can think of find such freedom in their facility with a medium. To have this degree artistic control and such a strong of editorial point of view is to be a complete artist. As such, Yuxweluptun sets a standard. The deskilling of art in recent decades has meant a loss in our ability to set criteria for the judging of artworks. Take a look at the paintings of Lawrence Paul Yuxweluptun if you want to find them again.

This text originally appeared in Hunter and Cook #5

You are currently browsing entries tagged with Modernism at Army of YouTube.